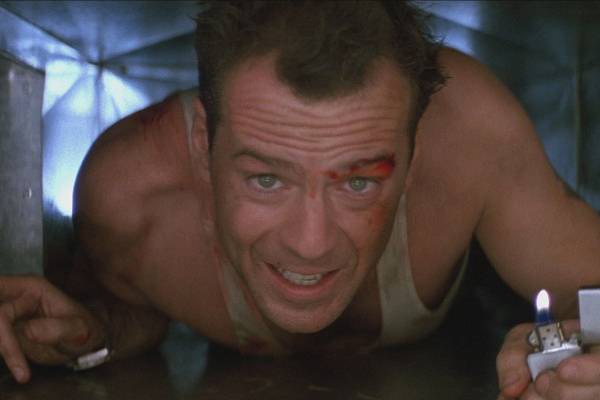 With the overly-bromantic release of the fifth instalment of the Die Hard franchise looming large (Valentine’s Day, no less) I thought it would be the perfect opportunity to go back at pick out some of my favourite moments from the first four films. Seeing as we’re celebrating the fifth film I thought I’d keep the list at five too and there is some bonus Die Hard as well for the uhhhhh, die hards. So here, in no particular order are my five favourite moments from the Die Hard series:   1. Bringing down a plane with a cigarette lighter and turning said plane into landing lights for other planes from Die Hard 2

2. The Sandwich Board from Die Hard With A Vengeance

3. Surviving total destruction of a subway station in Die Hard With A Vengeance

Also, here is a bonus Die Hard list, my top five one-liners. I quickly realised I couldn't do a Die Hard list that didn't include some of those cracking one liners:   Bonus: Top 5 one-liners   1. John McClane via Hans Gruber: "Ho ho ho, now I have a machine gun..." (Die Hard)

2. McClane: Now I know what a TV dinner feels like (Die Hard)

3. Inspector Cobb: Have you been drinking? McClane: Not since this morning! (Die Hard with a Vengence)

4. McClane: I was working on a nice fat suspension, smoking cigarettes and watching Captain Kangaroo (Die Hard with a Vengeance)

5. McClane: Yippee-kai-ay motherfucker! (All of them)