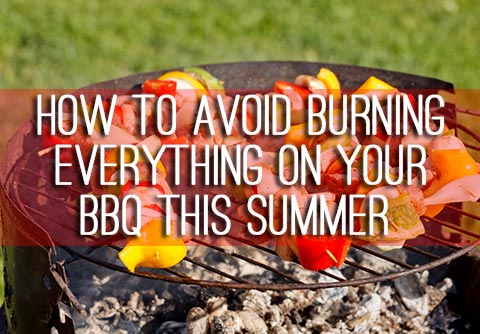 How to avoid burning everything on your BBQ this summer

There are a number of things that are a given when the sun comes out; sunburn, women in skimpy outfits, the same people who complain about it being too cold now complaining that is too hot, and the increase in everyone getting their grill on with a BBQ. With the recent spell of great weather set to run into the weekend and beyond we thought we would give some tips on how to grill some damn good meat while you’re out at the park, beach or wherever!

Remember a couple of firelighters or at least matches

While a disposable BBQ has a sheet of card that you need to light in order to get the BBQ going, they’re not 100% reliable. If you can pop a couple of firelighters in your bag or even a lighter you can make sure the party doesn’t fall flat before it even gets started.

Let the flames die down before you grill

If like me you want to get grilling as soon as you’ve got some flames, don’t! You’ll want to let the flames die down before you start cooking or else they’ll just burn your food, once the coals are nice and hot and the flames have subsided you’re good to go. Almost…

Brush the grill with some oil before you add the meat

To avoid any meat sticking to the grill when you’re cooking just lightly brush the grill with some oil before you place the meat on the grill. This will make sure that you’re able to flip and remove your food from the grill without it sticking and ruining it, if you’re marinating meat this can also help.

Everyone loves a sausage in a bun with some ketchup; unfortunately they’re not the best choice for your park and beach barbequing sessions. They hold a lot of a fat and as a result can cause flames to lick up from your BBQ which will of course end up burning them. How many times have you had a sausage from a BBQ that is charred black on the outside? Exactly. If you can try and stick to better cuts of meat, like steak burgers for instance.

Clean up everything and get rid of it properly, of course

Of course, if you’re going to be having a BBQ in a public place then don’t forget to tidy up your mess! If you’re in the park some may have dedicated BBQ areas, if not make sure you can put your BBQ up on something raised. If you’re on the beach then be sure to cover over any stones with cold ones so others don’t come along after you and injure themselves. Most parks and beaches offer plenty of bins and the like to dispose of your rubbish. For instance, if you want to have a BBQ on Brighton beach you can, but the city council have their own set of rules for doing so. Just be careful and thoughtful of others!