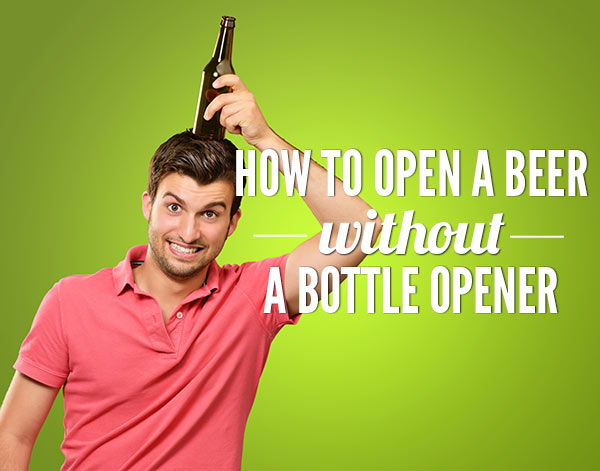 The best ways to open a beer without a bottle opener

We’ve all been there before, it’s a lovely day and you’ve decided to go for a BBQ in the park or on the beach. You’ve got everything you need, disposable BBQs, meat, bread, condiments, you’re all set. But wait, you’ve only bought bottles of beer because they were on offer and nobody has a bottle opener! Worry not though, because there are plenty of inventive and useful ways of opening a bottle without the need for a fancy bottle opener. Here are some of the best and most impressive ways I’ve seen of opening a bottle of beer without a bottle opener:

One thing you’re certain to have is more bottles of beer. So why not learn how to pop open one bottle using another? It’s incredibly useful, and it actually looks pretty cool. I can’t quite believe I’d never thought of this one before. You’ll be opening everyone’s bottles at house parties before you know it: http://www.youtube.com/watch?v=HfzxuOwhIsQ

You’ll most likely have a set of keys on you as well, so it makes perfect sense to be able to open a bottle using those. It’s easier than you think, so pop a few caps off and become the saving grace of your friends as you ensure the good BBQ times will be accompanied by beer: http://www.youtube.com/watch?v=4BcpLr4qJv0

There’s usually at least one smoker in your friend group, and if they’ve got the right kind of lighter you can use one of those babies to open your beer too. It’s another method that looks cool when you do it, just beware that if other people see you doing this and they’ve made the same mistake that you did you may well end up opening bottles for the entire park or beach all day. It’s no big problem though, as you can simply ask for payment in the form of beer: http://www.youtube.com/watch?v=N9KJtKXCHx8

This one is a little harder but that makes it that little bit more impressive. Just fold up a note several times, pop it under the cap and hey presto, you’ve used a bit of paper to get a bottle cap off a bottle of beer. I never thought I’d be able to open a bottle of beer with some paper, but after watching this video I can: http://www.youtube.com/watch?v=zrTq5t8OlMM

You might not have a work surface or straight edge to work with on the beach or in the park, so this one works well for house parties when you can’t find a bottle opener for love nor money. This usually happens later on in the night when someone else has either misplaced it or taken it home in their drunken state. Just one sharp tap and boom, you’re the saviour of the party: http://www.youtube.com/watch?v=R9BxaPWQLeY

Bonus: Best ways to open a beer (Do not try these yourself!)

There are plenty of creative ways to open a bottle of beer that I haven’t covered, and the following video showcases some of the more extreme ways that people have found to work. I wouldn’t try to attempt most of the methods in this showcase though, especially with a chainsaw (!): http://www.youtube.com/watch?v=0QmKHfYfovk You can also find plenty of cool and intetresting bottle openers online if you'd rather you didn't have to rely on your car keys or someone having a lighter.