What Are Men Self Conscious About

We’re self-conscious beings, always observing blemishes on our face and bodies which are invisible to the passer-by, but appear disastrously hideous in our minds. From a few spots on the face to a double chin, we all have our own imperfections which we would love to improve.

We therefore decided to run a survey to 680 men, asking them about their deeply embedded insecurities.

Some of the results were very interesting. Unsurprisingly, it is our bellies that lead the way, with 72% of people stating they don’t feel happy with their stomach. What was interesting however was that almost 15% are unhappy with their legs, while ‘moobs’ were the second biggest factor at 23.5%. 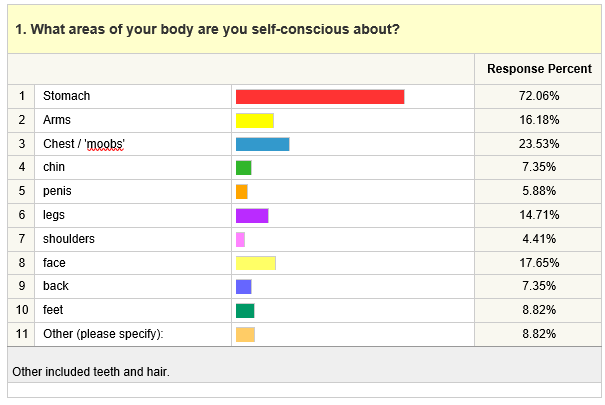 We then asked what party of the body in particular are you most self-conscious about. Legs once again stood out, as the second biggest body issue that men are concerned about. 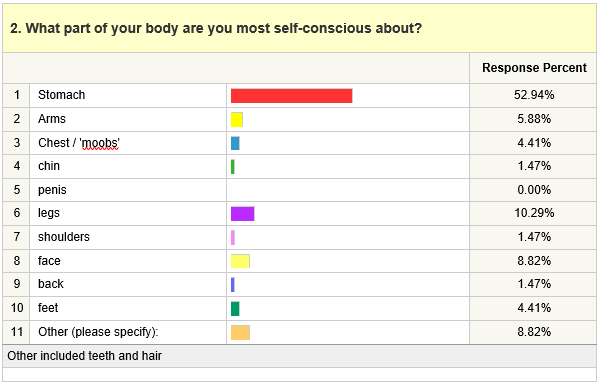 We then focused in on what it is on our body that really grinds our gears. Keeping with the stomach issues, an issue with obesity is the number one concern, however it is very closely followed by a want for increased muscle.

Even people who have built up a fair amount of muscle will often feel insecure regarding their size, with an increased amount of people admitting to struggling with muscle dysmorphia. This is a form of body dysmorphic disorder, where someone feels they are too slim and frail, the opposite of anorexia.

Teeth was the third biggest issue, a feature mocked by the American media in TV shows, portraying British people as buck toothed oaths. Then again, this probably wasn’t helped by rock stars of the 60’s such as Keith Richards.

Disclaimer: Have you seen a picture of Keith Richards recently? He’s gone and done some work on his teeth, he’s got a great pair of pearly whites at the mo, that was a shock! 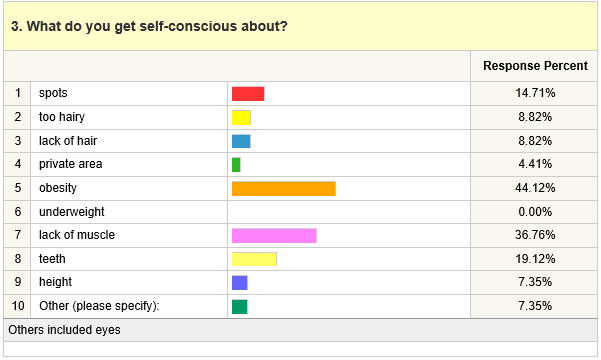 Superstar Hollywood actors are often seen topless, with ripped abs below a strong chest, big biceps and boulder shoulders. It is a motivating and inspirational image, but something which is realistically unachievable for many people, considering time and body limitations. For many of us, we will do the best we can with what we’ve got, however these images can put unwanted pressure on us to experiment with our bodies.

63% of men felt that there was too much pressure on them to look a certain way. This figure still isn’t as high as when asked to females on the pressure faced on keeping up a certain appearance, but the pressure does seem to be growing for men.

A common pitfall for many of our male readers, one issue with obesity is it creates the appearance of boobs on a man's chest. This can damage a lad's confidence, therefore we have gathered some general tips on how to combat this issue and what you need to know.